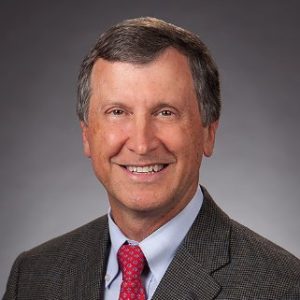 Join us on Tuesday, Dec 13th when EJBA will celebrate a year of growth and prosperity with a special Holiday Menu including wine. As always, our meeting will be at the Metairie Country Club from 11:30 am to 1:00pm. Our guest speaker will be Mark Lewis, Project Coordinator for the Louisiana IT Symposium and author of “Give A Damn”. www.giveadamnbook.com.

Stephanie Cox from the Jefferson Chamber of Commerce will be our Commerce on Parade sponsor.

EJBA will be implementing our new pricing structure for our monthly luncheons.  Effective with our December meeting, members will still receive the discounted rate of $30 with a reservation. Pay at the door and future-members will be $40.

The menu will include:

*6oz Filet of Sirloin with vegetables and mashed potatoes

Born and raised in Rochester, New York, Mark received his BS degree in Finance from Boston College and an MBA in Marketing from Tulane. He joined IBM in 1981 and received many awards including Rookie of the Year in the Southern Region and a Golden Circle award in 1988. Mark voluntarily left IBM in February 1994 and helped formed Communiqué, a New Orleans based Internet Service Provider (ISP).

As President of the company, Communiqué quickly became the Gulf South’s ISP building a client base of over 10,000 users focusing on small to medium size businesses. After Communiqué was purchased in 1997,   Mark left a year later and formed EyeOnet, an Internet sales and marketing consulting firm which then merged with two other businesses to form a full service network and Internet services company called Orange Twine.  In November of 2000, Orange Twine was chosen by the New Orleans Chamber of Commerce as the Rising Tide Small Business of the Year in Technology.

In December 2012, Mark left the LTC to become a principal partner and now is the Managing Director in the business management and executive coaching firm, Simmons & White.  Mark helps coach entrepreneurs and organizations to develop strategies for growth and prosperity.  Mark is also the Project Coordinator for Louisiana’s largest annual IT Symposium for CIOs, CTOs and VP of IT and their direct reports.  Finally, Mark’s new book called, “GIVE A DAMN!” was recently published in June of 2016. www.giveadamnbook.com.