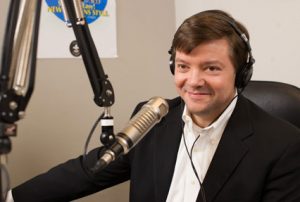 Since January of 1999, Crouere has been a radio talk show host based in New Orleans, LA. His programs are dedicated to examining the top issues of the day on the local, state and national levels. Crouere offers listeners political debate, analysis, and interviews with interesting political leaders and commentators. Currently, Crouere is host of a morning program, Ringside Politics, which airs weekdays from 7-11 a.m. CST on WGSO 990 AM and can be heard on several affiliate stations and on the Internet at WGSO.com..

Crouere is also host of Ringside Politics, a television version of the radio program, which airs on WLAE-TV, a PBS affiliate in New Orleans. New Orleans area television viewers can also watch Crouere on ABC-26 TV, where he has served since 2002 as the political analyst and provides his insight on local, state and national politics.

The website for the radio and television program RingsidePolitics.com provides a web poll, political rumors, a schedule of guests, and links to a variety of Crouere’s columns. He writes daily, weekly, and monthly political analysis columns and editorials for a select number of print and on-line publications, including BayouBuzz.com, the Northshore Conifer, Kenner Star, New Orleans City Business, and the Slidell Monthly. He provides regular columns and serves as the Political Editor for NewOrleans.com.

He also is the editor of a weekly e-mail newsletter, which has a circulation of 5,000 readers. Once a month, Crouere hosts a local version of “Politically Incorrect” at the Eiffel Society in New Orleans called Politics with a Punch which includes a panel of comedians, politicians, media personalities, and news makers.

As a Louisiana Republican Party leader and talk show host, Crouere has been interviewed for his perspective by the New York Times, national radio networks such as National Public Radio, Talk America, Radio America, and Catholic Radio, and national cable television networks such as Fox News, CNN, CNN Headline News, CNBC, and MSNBC.